The moral fiber of the US and the world has changed and is continuing to change. However, these changes are occurring in spite of what God and His word are saying. Perhaps something is missing or overlooked, so the question becomes, when did God change?

The postmodern movement ushered in a climate of subjectivity. This movement has led to a move away from objectivity with standard fixed rules and traditions. Instead, everything now passes through the lens of subjectivity, how an individual feels about what is right or wrong.

So, let’s look at some of these changes.

Truth – What is truth? Truth is the core of real things, events, and facts: it is a state of reality. Therefore, the truth cannot be legitimately shaken or disproven.

Truth is an element of God’s being. When He presented Himself to Moses on the mountain, He proclaimed His attributes. In Ex 34:5-6:

5 And the Lord descended in the cloud, and stood with him there, and proclaimed the name of the Lord.

6 And the Lord passed by before him, and proclaimed, The Lord, The Lord God, merciful and gracious, longsuffering, and abundant in goodness and truth,

Everything that proceeds out of the mouth of God is truth.

Truth is freedom. Jesus said in John 8:31-32, …”If ye continue in my word, then are ye my disciples indeed; 32 And ye shall know the truth, and the truth shall make you free.”

However, presently, truth is becoming what an individual feels is the truth. Even when the truth is in their face, they deny it and put their own reality in place of it. This denial of the truth has even reached the upper levels of government. 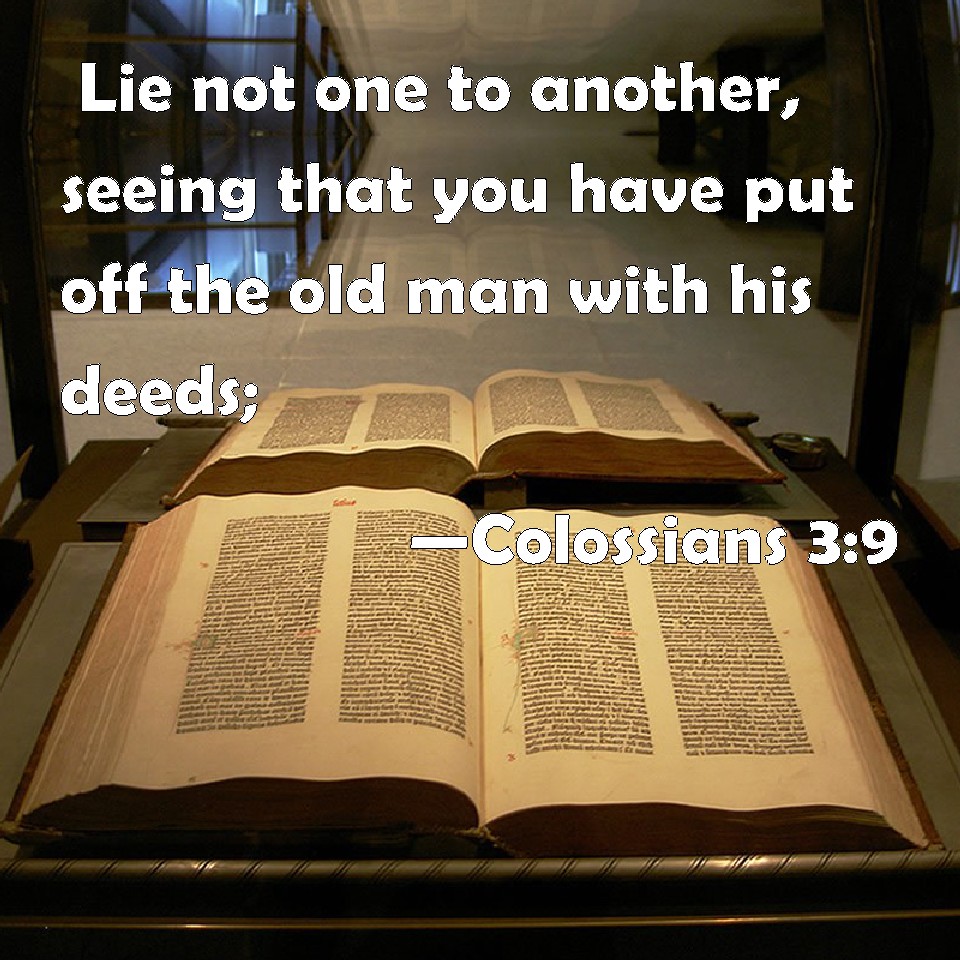 9 Do not lie to each other, since you have taken off your old self with its practices NIV

Ephesians 4:25
25 Wherefore putting away lying, speak every man truth with his neighbour: for we are members one of another.

Can it be any clearer?

Abortion – Abortion, the termination of human life, is legal in the US. The advocates for this act claim that it is a women’s constitutional right to chose to terminate life. This act is the law of the land. Statistics
indicate that from 2005 to 2018, 10,121,000 legal abortions were carried out in the US.

Now let that sink in; over 10 million human lives were destroyed. For what reason? This number doesn’t represent some financial statistic, but lives that never had a chance to live and society say it’s okay. 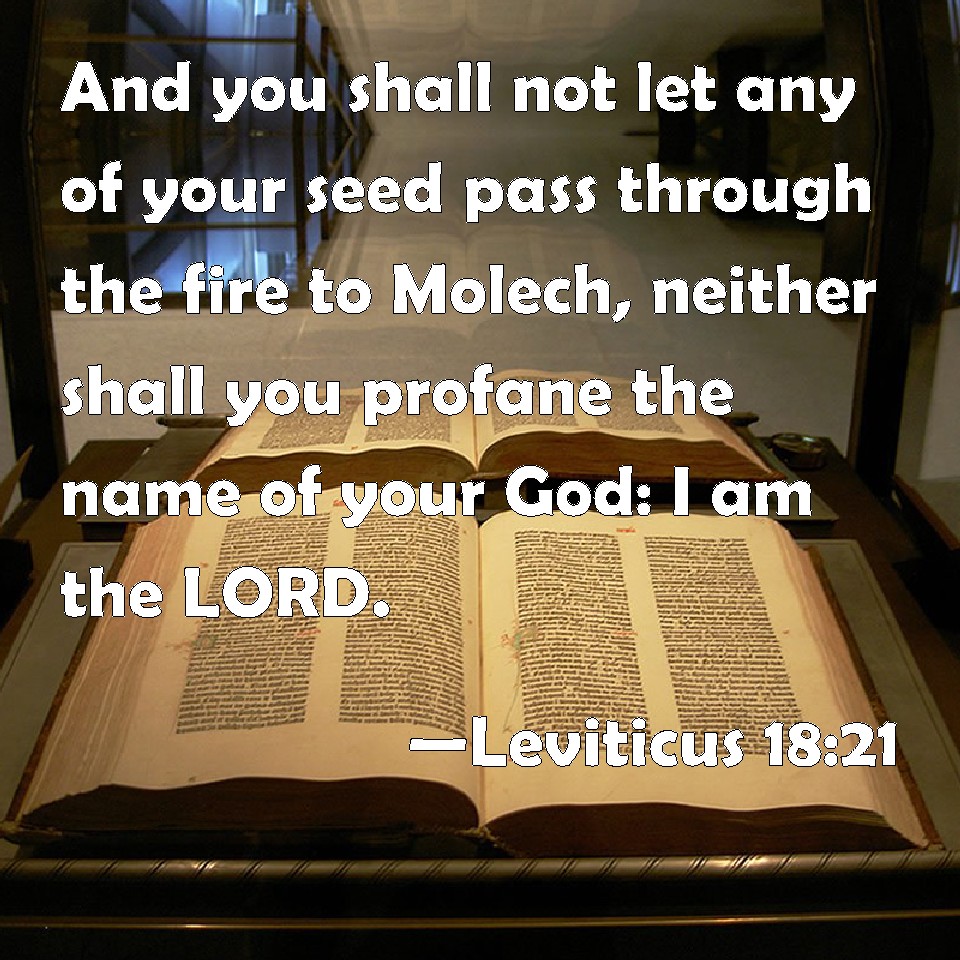 21 Do not give any of your children to be sacrificed to Molech, for you must not profane the name of your God. I am the Lord. NIV

God explicitly forbade the sacrificing of children. God wanted His chosen people, the Israelites, to be sanctified from the idolatrous nations who sacrificed children to the false god Molech. Leviticus contained the law for God’s people to live a holy life unto Him and still applies today.

The book of Deuteronomy is a repeat of the law, and once again, the offering of children is forbidden.

Homosexuality – Homosexuality is widely accepted today in the US and the world. According to a survey
performed by UCLA’s Williams Institute, there are 10,338,000 homosexuals (LGBT) in the United States. But, what does God and His Word say? Lev 18:22

22 Do not lie with a man as one lies with a woman; that is detestable. NIV

13 If a man lies with a man as one lies with a woman, both of them have done what is detestable. NIV

Again, these Scriptures are from the Levitical law and forbid the detestable acts of the idolatrous nations.  However, the New Testament Scriptures address homosexuality also. 1 Cor. 6:9-11

Homosexuals are included with those who will not inherit heaven.

Same Sex marriage – This is the law of the land in the US and a few other countries. According to a 2019 population survey, there are 543,000 same-sex married couple households, and 469,000 households with same-sex unmarried partners living together in the US.

Question:
If God forbids homosexuality, how can there be validity in homosexual marriage? However, let’s look at what God and His Word say about it. Gen 2:22-24

22 Then the Lord God made a woman from the rib he had taken out of the man, and he brought her to the man.

23 The man said, “This is now bone of my bones and flesh of my flesh; she shall be called ‘woman,’for she was taken out of man.”

24 For this reason a man will leave his father and mother and be united to his wife, and they will become one flesh. NIV

Notice that God created man and woman, and they are to be united as one flesh. This design is the order of God’s holy and divine creation; this is the created order of life. There is nothing in Scripture that sanctions same sex marriage.

To God, Marriage is between a man and a woman.

Transgenderism – Some individuals are not satisfied with their physical sex at birth but prefer the opposite sex (a man desiring to be a woman and vice-versa). This attitude includes adopting the behaviors and the appearance of the opposite sex. The modern and inclusive philosophy of some societies has embraced this attitude. So, what does God and His Word say about it? Deut 22:5:

Again, God created man and woman, and this is the order of God’s holy and divine creation; this is the created order of life. Therefore, the individuality between males and females is to be upheld. We must understand that there is a clear, distinctive difference between a man and a woman, and this clear, distinct difference is to be respected, maintained, and honored.

In this Scripture, God demanded that the created order of life was not to be violated. Wearing the clothes and adopting the behavior of the opposite sex is unnatural. In God’s eyes, it is abnormal, repulsive, distasteful behavior. However, even more severe, the Scripture indicates that transvestism is an abomination to God. God detests it. The idea conveyed is that the judgment of God will fall upon the person who seeks fleshly pleasure through transvestism.

Transvestism often directs to homosexuality; furthermore, this deviant behavior is often associated with homosexuality. The law of God was and is clear: the order of God’s holy creation that of male and female is not to be dishonored nor camouflaged. Females at birth are to be women, and males at birth are to be men. The distinction is to be protected, respected, and honored.

These are just a few of the areas societies, particularly in the US, have changed. Again, the idea is to be more modern and inclusive.

But, when did God change? Is He more inclusive? If so, how much? 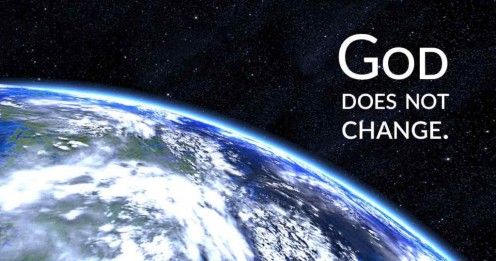 So how much has God changed? Let’s look at what His Word says in Mal 3:6-7

6 I the Lord do not change. So you, O descendants of Jacob, are not destroyed. 7 Ever since the time of your forefathers you have turned away from my decrees and have not kept them. Return to me, and I will return to you,” says the Lord Almighty. NIV

In this Scripture, we have the Lord’s call to His people to repent in view of His return through the prophet Malachi. He states that they were not destroyed because of the promise He made to Jacob, their forefather. He made a promise, and because He doesn’t change, His promises are sure. This promise is the only reason they had not been judged and completely cut off from the Lord. Though they had sinned and violated every term of God’s covenant, He would not change. He would uphold His covenant and abide by it.

However, they had fallen far from God because they had not kept His decrees and had fallen out of His favor. Therefore, he admonished them to return to Him, and He would return to them.

In other words, no matter how much they changed away from His Word (decrees), He was not changing. So, therefore, they would have to return to His will to receive His favor and so must we. God has not and will not change. He is the unchangeable God. There is no need for God to change, He’s perfect!

Surely the day is coming; it will burn like a furnace. All the arrogant and every evildoer will be stubble, and that day that is coming will set them on fire,” says the Lord Almighty. “Not a root or a branch will be left to them. 2 But for you who revere my name, the sun of righteousness will rise with healing in its wings. 4 Remember the law of my servant Moses, the decrees and laws I gave him at Horeb for all Israel. NIV

The day the Lord is referencing here is the day of His return. All of the arrogant and evildoers will be destroyed. However, the ones who obey the laws and statutes of Moses and revere God will be saved.

The Takeaway and Life Application

Indeed society has changed and is still evolving. But, unfortunately, it is changing and evolving away from God. However, no matter how much society changes, no matter what man’s law says, no matter how far we evolve from God’s Word, God will not change. Therefore, those who continue down this path will reap what happens on the day of the Lord.

Christ united all, both Jews and Gentiles, as God’s people (Gal. 3:28). Therefore, just as the Israelites need to return to God in verses 6 and 7, so must all of us.

We must remember the Scripture in 2 Chron. 7:14

It behooves us to have reverence for the unchanging God and His Word.

Zeph. 2:3: “Seek the Lord, all you humble of the land, you who do what he commands. Seek righteousness, seek humility; perhaps you will be sheltered on the day of the Lord’s anger.” NIV

Questions, comments, and concerns are welcomed below. You will receive a response.

12 thoughts on “When Did God Change?”