The postmodern movement is moving forward faster than ever. This movement has manifested itself to the point that subjectivity is ubiquitous in the land. One of the increasingly prevalent tenets of postmodernism is cancel culture. This culture seeks to cancel anything that isn’t popular. But does that include the Bible? This article addresses the Bible and cancel culture.

What is Cancel Culture?

Cancel culture is also known as call-out culture. Cancel culture is the term used for the growing trend of modern society to censor individuals who advocate socially disfavored or unpopular viewpoints. Those subjected to this exclusion are said to have been “canceled.”

Cancel culture is not new but a current form of ostracism. The principle of canceling a person or product has been around for quite some time. Both non-conservatives and conservatives have applied it in the form of boycotting. However, lately, social media has propelled it into a widespread force that punishes the victim for all sorts of what may be considered moral violations. This force will threaten, ridicule, and even attempt the offending party fired from their job. Actually, cancel culture has cost teachers, journalists, actors, scientists, etc., their assignments.

This canceling can occur for being on the wrong side of such topics as:

Based on today’s culture in the U.S., the standard that defines what is acceptable or not is a liberal, pro-abortion, pro-LGBTQ mindset. If an individual disagrees with the progressive liberal agenda, they can lose their reputation, popularity, or even their job. Ironically, cancel culture is a hypocritical attitude of intolerance while simultaneously demanding tolerance. Its intensity and reach differ and are deeply entrenched in today’s society. As a result, it is causing a restriction on free speech and adding to the ever-present divisive atmosphere. A recently published national survey indicates a rise in self-censorship when citizens decline to express their views.

Cancel Culture and the Bible

Is it possible that the Bible is subject to cancel culture? Well, think about it; the Bible speaks against the liberal pop culture mindset mentioned above. However, this is an insidious process.

The Bible is very popular, especially in the west. For example, in the U.S., we

have religious freedom. Even though it is somewhat of a façade in the current cultural environment, the outright elimination of the Bible would be the epitome of religious bias. This point makes suppression of the Scriptures objectionable, at least for now.

However, postmodernism has ushered in a time of shocking eagerness to repress and prohibit content that is disagreeable with the liberal agenda.

In this suppressive environment, many are taking advantage of what they observe as an opportunity to confront the ideas contained in the Bible rather than the Bible itself.  However, the desire is there, and this step-by-step approach comprises the insidious process of cancel culture’s attack on the Bible.

If Satan cannot get in the front door, he will attempt the backdoor as long as he can get in. We are warned about this in the Scriptures: Eph 4:27-28, “and do not give the devil a foothold.” NIV

Let us look at some of the issues under condemnation.

To the chagrin of many in the Christian community, the desire to cancel the Bible has invaded our government. There has been a deep desire to eliminate biblical principles from the government. Over time this effort has grown deeper in intensity, scope, and explicitly.

This movement basically began with a controversy over displaying the Ten Commandments on government property.

In 1992, Justice Roy Moore was thrust into the national spotlight when he placed a wood carving of the Ten Commandments in his Etowah County courtroom. He has been the focus of praise and criticism since. 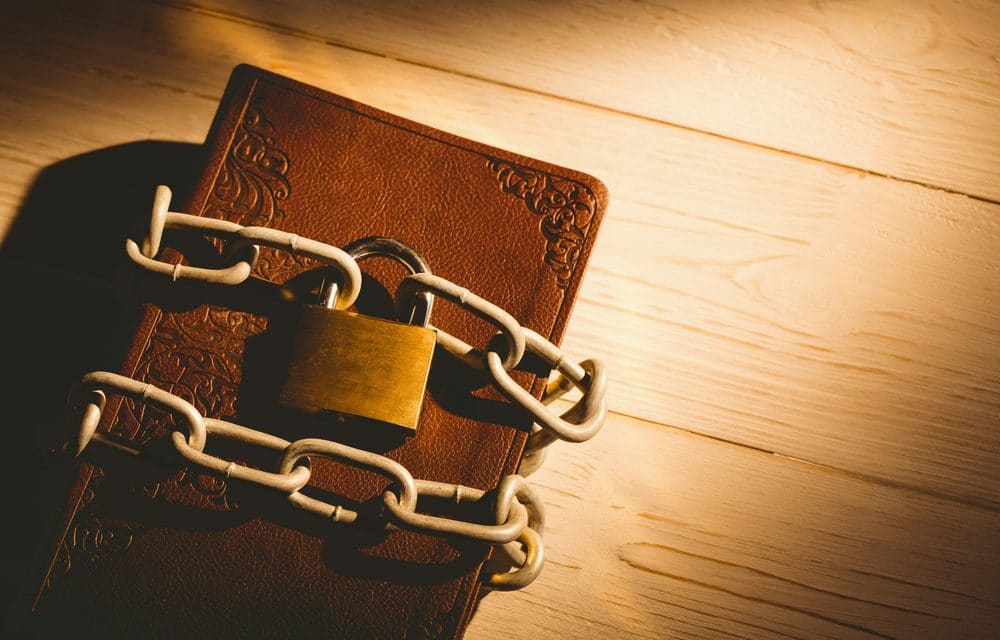 line on displays in the interior of courthouses, stating they violated the doctrine of separation of church and state.

Another dramatic illustration of this cancellation occurred in 2018 at the confirmation hearings for the then-nominee for Secretary of State, Mike Pompeo. He was grilled about his personal views, specifically regarding comments he made when the Supreme Court legalized same-sex marriage.

Similarly, a nominee to the D.C. Circuit Court was quizzed about their opinion regarding gay relationships being sinful or not. What is particularly interesting about these events is the U.S. Constitution bans religious tests for individuals desiring to serve in public office. Their personal views are not to be considered. Yet, it was praised by some.

Keep in mind that this assault on Biblical principles did not stop with the government but the private sector as well.

Creationism believes that the universe and living organisms originate from specific acts of divine creation, as in the biblical account, rather than natural processes such as evolution. Creationism has been under severe attack. For example, in March of 2021, it was recommended by a prominent

scientist that schools teaching any form of creationism that “deviates from national norms” should “prominently disclose” the occurrence of such instruction on transcripts and materials to make certain that those classes are not permitted to be a factor toward recognized science degrees.

In other words, “deviates from national norms” means “does not embrace evolution as the origin of life.” This action is an outright cancellation of a Biblical principle.

Numerous individuals have seen their careers damaged for acknowledging that there is considerable scientific evidence for the intelligent design theory behind the origin and diversity of life—a stance far too close to the Bible’s narrative of God to be permitted to go “uncanceled.”

For example, the President of the University of Idaho drafted a letter to all faculty, staff, and students stating that only evolution is “appropriate to be taught in our bio-physical sciences.” The letter indirectly said that disagreeing with evolution is only possible through philosophical and religious concerns, which contradicts research that produces credibility on intelligent design, a form of creationism.

In addition, a Double-Ph.D. biologist faced professional harassment for allowing the publication of a paper welcoming to the idea of intelligent design.

A Distinguished paleontologist was forced to leave his museum position after a 17-year career and an enormous number of publications when he orally expressed public cooperation for the idea that scientific proof points to an intelligent basis to life. These stories are documented at the website FreeScience.today.

The message is clear: even an inkling of biblical ideas of life’s beginnings and diversity or disagreement with the dogma of evolution is enough to be canceled.

The Biblical principle on life in the womb is under severe attack. The Bible is clear on the sanctity of human life created in the image of God. Gen 1:26 “And God said, Let us make man in our image, after our likeness…”

The Bible also expresses how precious life in the womb is and the punishment for causing it harm.

22 “If men who are fighting hit a pregnant woman and she gives birth prematurely but there is no serious injury, the offender must be fined whatever the woman’s husband demands and the court allows. 23 But if there is serious injury, you are to take life for life, 24 eye for eye, tooth for tooth, hand for hand, foot for foot, 25 burns for burn, wound for wound, bruise for bruise. NIV

This Scripture indicates that injury and death to an unborn child is equal to that of a child outside of the womb, and the punishment is to be administered accordingly.

Scripture further reflects how God regards life in the womb as a living human being. Jer. 1:5

5 “Before I formed you in the womb I knew you, before you were born I set you apart; I appointed you as a prophet to the nations.” NIV

This Scripture is one of a few passages confirming how God views life in the womb.

Abortion is so widely accepted in the U.S. that anyone who holds the Biblical view of life in the womb is finding it difficult to express it publically.

Anyone that believes the unborn must be respected as a human being, made in the image of God, is subject to be canceled.

The list goes on: marriage, homosexuality, justice, and morality are all addressed in the Bible for direction and application. Yet, these precepts are increasingly ignored.

The Cost of Canceling the Bible

Many are increasingly ejecting their ideas of what they feel is a just society, and the Bible does not reflect those ideas. In fact, it is just the opposite. So why not cancel those ideas so that we can walk in our own reality. The problem is, those realities are just dreams, and in time, the actual realities will reemerge. Society may become subjective, but God remains objective and will have the last word. Scripture addresses this as well.

We are currently experiencing this in the U.S. There is rebellion against authority. We are shooting one another in the streets. We cannot even make rational decisions to protect ourselves and our loved ones, and our government is increasingly dysfunctional.

Without God, all that is left is the government, and when the government is dysfunctional, the result is nihilism—the state that all existence is useless, senseless, and meaningless. Yet, we wonder why the suicide rate is what it is.

21 Because that, when they knew God, they glorified him not as God, neither were thankful; but became vain in their imaginations, and their foolish heart was darkened.

22 Professing themselves to be wise, they became fools,

24 Therefore God gave them over in the sinful desires of their hearts to sexual impurity for the degrading of their bodies with one another. 25 They exchanged the truth of God for a lie, and worshiped and served created things rather than the Creator — who is forever praised. Amen.

26 Because of this, God gave them over to shameful lusts. Even their women exchanged natural relations for unnatural ones. 27 In the same way the men also abandoned natural relations with women and were inflamed with lust for one another. Men committed indecent acts with other men, and received in themselves the due penalty for their perversion.

28 Furthermore, since they did not think it worthwhile to retain the knowledge of God, he gave them over to a depraved mind, to do what ought not to be done. 29 They have become filled with every kind of wickedness, evil, greed and depravity. They are full of envy, murder, strife, deceit and malice. They are gossips, 30 slanderers, God-haters, insolent, arrogant and boastful; they invent ways of doing evil; they disobey their parents; 31 they are senseless, faithless, heartless, ruthless. NIV

This state of affairs is the result when God is removed from life. God just

turns us over to our depraved minds, and all hell breaks loose literally.

When we cancel the Bible, we are canceling God. Canceling the Bible is foolish, and it is futile!

Any questions, comments, concerns, or if you would like to share an experience involving cancel culture, it can be left below. You will receive a response.

4 thoughts on “The Bible and Cancel Culture”