Sex used to be a dirty word, a word that represented taboo. However, with the arrival of the sex revolution in the sixties, it became a word of freedom and self-expression. But here’s a question, what does the Bible say about sex? This article explores sex and the Bible.

Table of Contents hide
1 Sex and the Bible
2 Conclusion

Sex and the Bible

What does the Bible say about sex? A lot! Sex is treaded throughout the Scriptures and not in a negative way. Sex, as with anything else, can be used in a good way and can be misused in a wrong way.

20 “And Adam gave names to all cattle, and to the fowl of the air, and to every beast of the field; but for Adam there was not found an help meet for him.”

21 “And the Lord God caused a deep sleep to fall upon Adam and he slept: and he took one of his ribs, and closed up the flesh instead thereof;”

22 “And the rib, which the Lord God had taken from man, made he a woman, and brought her unto the man.”

23 “And Adam said, This is now bone of my bones, and flesh of my flesh: she shall be called Woman, because she was taken out of Man.”

24 “Therefore shall a man leave his father and his mother, and shall cleave unto his wife: and they shall be one flesh.”

25 “And they were both naked, the man and his wife, and were not ashamed.”

This passage involves the first married couple. After Adam had named all of the animals and beasts, there was no one compatible for him. However, God, in His wisdom, recognized that Adam should not be alone and created woman. We see in verse 25 that they were both naked but not ashamed. This verse illustrates that husbands and wives are permitted intimacy that others are not. This fact is contrary to what the sexual revolution ushered in—more on this to follow.

The man and the woman were naked; however, they were not ashamed. Why? Because they had no reason to be ashamed. They were flawless beings, totally blameless. They had done no wrong. Therefore, they felt no guilt or shame at all. They belonged to one another: their bodies belonged to the other, and together they belonged to God. They could stand before God and before each other in faultlessness, perfectly innocent, and free of any sense of shame, guilt, wrong, or failure. There was no sin, guilt, or shame, nothing at all to hide from each other or God.

Before Adam and Eve sinned, sex was part of the created order, and God declared that creation was “very good” (Gen. 1:28, 31).

After Adam and Eve sinned, sex was affected. Gen 3:6-7

6 “When the woman saw that the fruit of the tree was good for food and pleasing to the eye, and also desirable for gaining wisdom, she took some and ate it. She also gave some to her husband, who was with her, and he ate it.” 7 “Then the eyes of both of them were opened, and they realized they were naked; so they sewed fig leaves together and made coverings for themselves.” NIV 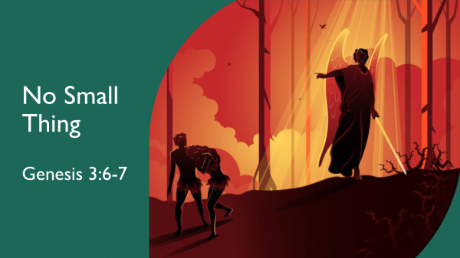 consequence, sin had stripped them naked. The evil side of sex was exposed.

Sex was no longer just good but also had an evil aspect, an aspect that is ever-present in these present times.

In spite of this consequence, throughout the entire canon of Scripture, the Bible confirms that even though sex was affected by the fall, it is still to be celebrated and protected. In the Book of Proverbs, the wise father instructs his son to enjoy his wife in Prov. 5:18-19

18 “May your fountain be blessed,

and may you rejoice in the wife of your youth.”

may her breasts satisfy you always,

may you ever be captivated by her love.” NIV

A man is to find all of the joys of physical pleasure with his wife, and his fountain (his life) will be blessed. 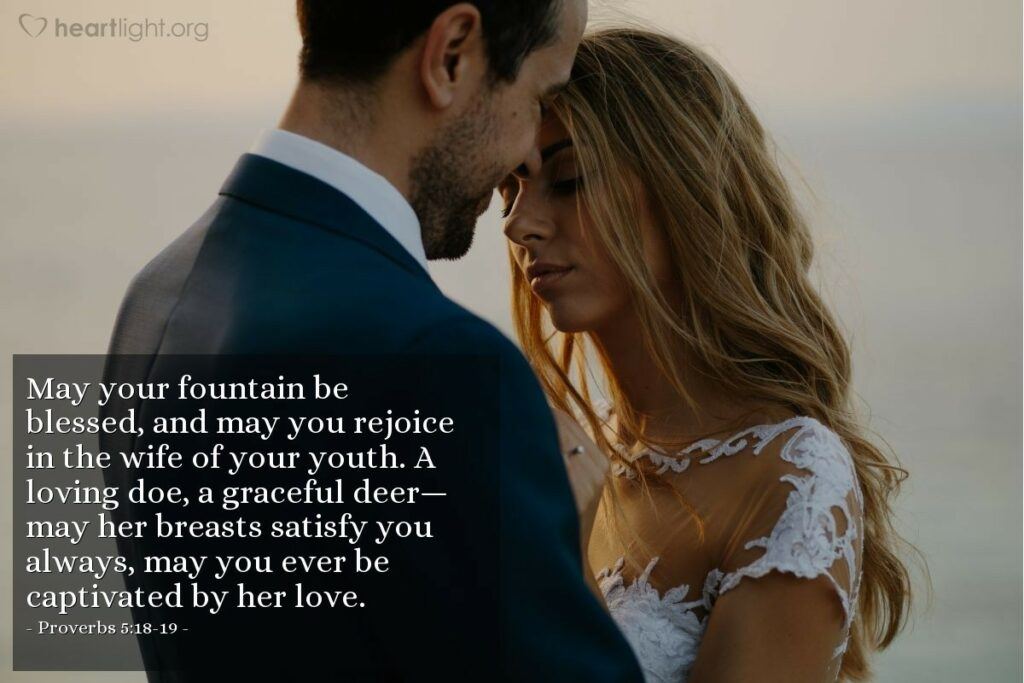 This passage is an endorsement for sex and marriage. There is no shame with sex between a husband and wife. It is to be honored and enjoyed wholly as the gift it is.

Let us look at more Scriptural instructions regarding sex. 1 Cor. 7:3-5

3 “The husband should fulfill his marital duty to his wife, and likewise the wife to her husband. 4 The wife’s body does not belong to her alone but also her husband. In the same way, the husband’s body does not belong to him alone but also to his wife. 5 “Do not deprive each other except by mutual consent and for a time so that you may devote yourselves to prayer. Then come together again so that Satan will not tempt you because of your lack of self-control.” NIV

This passage involves marital conjugal rights. Notice the mutuality: the wife is not to deny her husband’s sexual desires, nor is the husband to deny his wife’s. Any deprivation must be mutually agreed upon and only for “a time” to avoid becoming tempted by Satan with infidelity. Marital intercourse serves as protection against a wandering eye and a sinful heart. Therefore, sex within a marriage should be free, generous, and reciprocal.

After all, the Scripture says in Heb 13:4, “Marriage is honourable in all, and the bed undefiled: but whoremongers and adulterers God will judge.” Fidelity is the prescription!

The next Scriptural instruction regarding sex is regarding procreation.

27 “So God created man in his own image, in the image of God he created him; male and female he created them”

28 “God blessed them and said to them, “Be fruitful and increase in number; fill the earth and subdue it.” “Rule over the fish of the sea and the birds of the air and over every living creature that moves on the ground.” NIV

God created a male and a female and told them to “be fruitful and increase in number.” This command did not change when they sinned against Him. Sex continued, and so did procreation.

Done correctly, sex is a blessing that often results in children, but it is not its only purpose. It is also for the glory of God and the solace of humanity when it is handled correctlyit ectly cr did nnhem to beiife.

Next, the wrong way – The Scriptures are very balanced. Therefore just as they address the correct way of handling our sexual appetites, they also address the incorrect way.

Fornication is denounced in the Scriptures in many places.

For example, Eph 5:3
“But among you there must not be even a hint of sexual immorality, or of any kind of impurity, or of greed, because these are improper for God’s holy people.” NIV 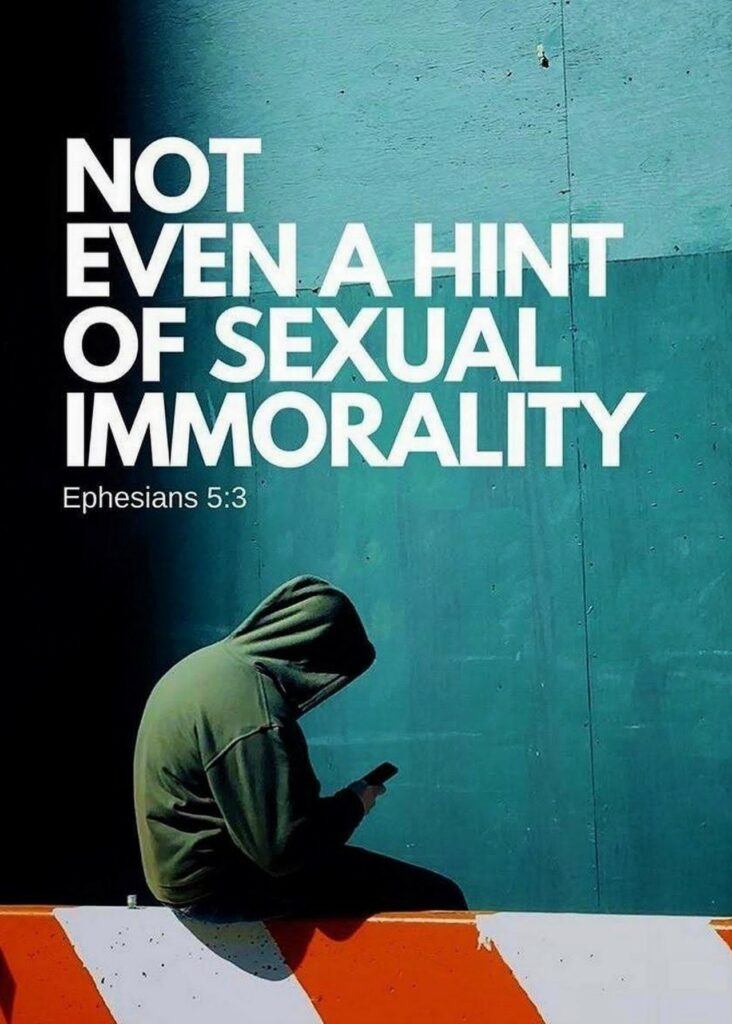 4 “Neither filthiness, nor foolish talking, nor jesting, which are not convenient: but rather giving of thanks.”

5 “For this ye know, that no whoremonger, nor unclean person, nor covetous man, who is an idolater, hath any inheritance in the kingdom of Christ and of God.”

In this passage, Paul addresses the things forbidden in the lives of followers of God. Fornication is the first item on the list of uncleanness. This “is improper for God’s holy people.” Individuals who engage in uncleanness will not have an inheritance in God’s kingdom.

18 “Flee fornication. Every sin that a man doeth is without the body; but he that committeth fornication sinneth against his own body.”

Adultery – Adultery is another form of sexual immorality and is the sin of a married individual that has sex with another individual other than their spouse. This sin is denounced in the Ten Commandments. Ex 20:14 reads:

14 “Thou shalt not commit adultery.”

It doesn’t get any clearer than this.

Incest – Incest is the sin of sexual relations between close relatives. This practice is condemned in the Scriptures as well. Lev 18:6

6 “‘No one is to approach any close relative to have sexual relations. I am the Lord.” NIV

Sexual intercourse between man and his wife during the wife’s menstrual cycle:
This act is condemned as unclean in Lev 18:19, which reads:

19 “‘Do not approach a woman to have sexual relations during the uncleanness of her monthly period. NIV

Homosexual intercourse – Sexual contact between individuals of the same sex is condemned in such passages as Lev 18:22

22 “‘Do not lie with a man as one lies with a woman; that is detestable.” NIV

Again we see that the sexual impure will not gain acceptance in the kingdom of God.

Bestiality – Bestiality is the performing of sexual intercourse with animals by both either men or women and is condemned in Lev 20:15-16:

15 “‘If a man has sexual relations with an animal, he must be put to death, and you must kill the animal.

16 “‘If a woman approaches an animal to have sexual relations with it, kill both the woman and the animal. They must be put to death; their blood will be on their heads. NIV

Rape – The violent act of an individual forcing sexual acts upon another individual is condemned in Deut 22:25-27

25 But if out in the country a man happens to meet a girl pledged to be married and rapes her, only the man who has done this shall die. 26 Do nothing to the girl; she has committed no sin deserving death. This case is like that of someone who attacks and murders his neighbor, 27 for the man found the girl out in the country, and though the betrothed girl screamed, there was no one to rescue her. NIV

Lust – Lust is entertaining extreme desires for another individual’s body sexually in the imagination in a way that would be immoral in real life, and Jesus condemned it in Matt 5:28:

28 But I tell you that anyone who looks at a woman lustfully has already committed adultery with her in his heart. NIV

Oh, how far the world has strayed from these teachings! Just spending an hour in front of the television will confirm this statement.

Fornication has become the activity of the day.  All sorts of sexual immorality have been tolerated and accepted as the norm. Societies may have changed, but God has not, for His Word says, “I the Lord do not change…” (Mal. 3:6) NIV 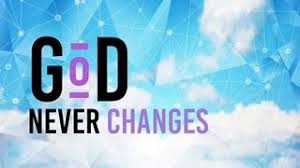 The world’s attitude regarding sex and other Biblical teachings is concerning. The Bible has become a victim of cancel culture. Please read the article, The Bible and Cancel Culture for more on this topic on this website.

The time is drawing near when the world will be judged for God’s Word also says in Mal. 4:1:

1 “Surely the day is coming; it will burn like a furnace. All the arrogant and every evildoer will be stubble, and that day that is coming will set them on fire,” says the Lord Almighty. “Not a root or a branch will be left to them.” NIV

This Scripture and others are very clear of the demise of the unrighteous. They will be severely punished.

But as mentioned before, the Scriptures are balanced and are also clear of the blessings of the righteous. For example, in Mal 4:2-3

2 But for you who revere my name, the sun of righteousness will rise with healing in its wings. And you will go out and leap like calves released from the stall. 3 Then you will trample down the wicked; they will be ashes under the soles of your feet on the day when I do these things,” says the Lord Almighty. NIV

The choice is ours.

It would be appreciated if you would leave your questions, comments, or concerns below.

10 thoughts on “Sex and the Bible”