What is Popular Christianity?

Simply put, it is Christianity that has been influenced more by popular interpretations, feelings, and opinions rather than the Holy Scriptures themselves. 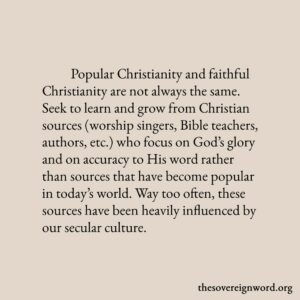 It is one of the end products of the postmodernism movement and it has crept its way into the church. For more information on postmodernism, please read the article Postmodernism and the Church on this website.

The problem with many professing Christians today is they are yielding to the spirit of compromise.

The Consequences of Popular Christianity

The main consequence is the watering down of the true meaning of Christianity and the application of it in the lives of Christians. Many who profess themselves as Christians have little to no knowledge of what it truly means to be a Christian.

In earlier decades, there was an atmosphere of excitement in the Christian church. There was a rise in the charismatic and evangelical movements, which created an upsurge in Christian publishing and broadcasting, even new Biblical translations and study tools. Christians were excitedly hosting small Bible studies in their homes and there was enormous growth in Bible-based church congregations.  Megachurches emerged with multiple services on Sunday mornings instead of one.

Individuals were moved by a sincere craving to exalt the Lord, experienced a sincere love for the Word of God and a desire to understand it, and a transformed interest in holiness, combating the steady moral decay that had gained such a foothold in prior years.

But later arrived a period of decline, a spiritual decline. The church has gradually turned away from the true revival and instead pursued the influence of popularizing Christianity with world philosophy.

Even when Jesus was here on earth, he experienced similar reaction. At one point, He had had many disciples. In John 6:2, it reads:
2 And a great multitude followed him, because they saw his miracles which he did on them that were diseased.
However, after Jesus shared profound truths on what following Him meant, they departed from Him. Verses 60 and 66 of the same chapter reads,

60 Many therefore of his disciples, when they had heard this, said, This is an hard saying; who can hear it? 66 From that time many of his disciples went back, and walked no more with him.

Today, too many professing Christians are also finding His teachings hard to hear and accept and are forming their own Christianity (Popular Christianity) and infiltrating the church with it.

The pop church is everywhere. It has wreaked havoc on local churches, turning them into little more than social clubs and community centers where the concentration is on an individual’s felt needs, not on the church’s function as the body of Christ in the world.

Popular Christianity is an insidious infection in the church today. Rather than attacking accepted beliefs head-on, it gives verbal acknowledgment to the truth while at the same time quietly undermining the foundations of doctrine. It is not a single movement or a visible organization but a spirit that can be found in various churches and Christian organizations.

To give an example of popular Christianity in action, let’s look at a very popular Christian female artist, Lauren Daigle. A little while ago she came under scrutiny for reluctantly sharing her views, stance, and beliefs on Christianity. During an appearance on a show, she was asked directly if she

felt that homosexuality was a sin. Her response was “I can’t honestly answer that,” was her response. “In a sense, I have too many people that I love that are homosexual. I don’t know. I actually had a conversation with someone last night about it. I can’t say one way or the other. I’m not God.”

So how’s that for compromising Scripture? It is disappointing for any individual who professes Christianity to take such a bland view in response to a question in which the Bible’s position (on homosexuality) is Chrystal clear. [Lev. 18:22, 1 Cor.6:9-11, Rom. 1:26-27, 1 Tim. 1:10] Unfortunately, homosexuality isn’t the only subject where this type of bland reaction occurs, but on a broad spectrum of issues. Pop Christianity is becoming a worldwide phenomenon.

The example that I’ve put before is a clear example of the leaning away from the clear teachings of Scripture to popular, secular opinions and views. Just because someone we love is involved in any sin does not make it any less of a sin or cancel Scripture. That is a trap and a snare.

Lauren Daigle has since stated that she considers herself an artist, not a Christian artist.

This is especially troubling for someone who has a platform that influences as many young people as Lauren does. The Scripture states …”For unto whomsoever much is given, of him shall be much required”:

All we have comes from God and if He has blessed any of us Christians with a platform of influence (teachers, spiritual leaders, artists, etc.); He has given it to us so that we may fearlessly proclaim Him and His Word. Ultimately such a one is held to a higher standard and accountability. [James 3:1]

Jesus said in Luke 12:48
For unto whomsoever much is given, of him shall be much required:

Unfortunately, professing Christians are increasingly more concerned about being politically correct than defending and standing on God’s Word. This is slowly poising the church rendering it spiritually ineffective. There no wonder God has allowed a virus upon us that has even stopped the 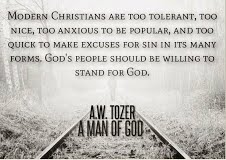 attending of church services. He is trying to get our attention. For more on this, please read the article, COVID19 and God: It is time to recognize God is speaking on this website.

This leaning toward worldly views and away from God represents a fear of man as opposed to a fear of God. This tendency manifests itself in several ways:

36 And a man’s foes shall be they of his own household.

For do I now persuade men, or God? or do I seek to please men? for if I yet pleased men, I should not be the servant of Christ.

Paul makes the point that we are not to be more concerned with getting approval of the world: people’s respect and adoration than approval with God. If we are, we cannot be a servant, a disciple of Christ. This addresses professing Christians who are afraid to take a firm stance on issues that are explicitly clear in Scripture (e.g. homosexuality, same-sex marriage, abortion, etc.). This is a fear of man’s way of thinking and disqualifies us as God’s servants.

These are manifestations of popular Christianity.  It is a poison that has affected the church in a very significant way.

The 21st-century church has become so broad and inclusive that many sound Christians avoid speaking the truth for fear of being divisive.

What else could Satan do to attempt to destroy the church that would be more effective than undermining the very Word of God, shifting the focus off of Christ, and minimizing holy living? All these things have happened slowly, steadily within the church. Unfortunately, the majority of Christians

seem to be unmindful to these issues, content with a Christianity that is in vogue and highly visible.

It is no wonder that Scripture refers to Satan as “…the prince of the power of the air …”
[Eph 2:2] His spirit and influence are spread throughout the air.

Before I close, let’s look at the other side of the coin to see what the fear of God looks like.

And fear not them which kill the body, but are not able to kill the soul: but rather fear him which is able to destroy both soul and body in hell.

This is clear as to who we should fear: not man who has no eternal power over our souls, but God who is in total control of our eternal destiny.

Ye are the salt of the earth: but if the salt have lost his savour, wherewith shall it be salted? it is thenceforth good for nothing, but to be cast out, and to be trodden under foot of men.

“The salt of the earth.” Salt represents among other things change; it changes the flavor of what it is applied upon. Jesus uses the metaphor to illustrate that we are to represent a change in our culture. Wherever we are placed, we are to induce a change in our surroundings, not be changed by our surroundings. Once the salt has lost its saltiness, it is simply no good and must be cast out. Once we allow ourselves to be compromised by trying to please man (the world). We are of no use to Him and His kingdom.

26 For whosoever shall be ashamed of me and of my words, of him shall the Son of man be ashamed, when he shall come in his own glory, and in his Father’s, and of the holy angels.

25 The fear of man bringeth a snare: but whoso putteth his trust in the Lord shall be safe.

There is so much more to Christianity than professing it. It is not a social club but hard work in this secular world that we live in. It is a commitment and a responsibility that is not to be taken lightly. If we accept Christ, we become His disciple and we are to worship Him in Spirit and truth.

We must also keep in mind what Jesus taught in His Sermon on the Mount in Matt 6:24 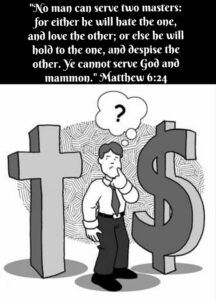 No man can serve two masters: for either he will hate the one, and love the other; or else he will hold to the one, and despise the other. Ye cannot serve God and mammon.

Please feel free to leave any questions, comments, or concerns below.

6 thoughts on “Popular Christianity: The Danger”