Repentance and Sin: two of the most foundational words in the Christian faith. Both of these words
come into play at the inception of accepting Christ as Lord and Savior.
However, often, as time goes on, the former word becomes the hardest to
implement. The purpose of this article is to shed a little light on
these two words: repentance and sin.

Table of Contents hide
1 All about sin
2 The good news!
3 What is biblical repentance

4 Whosoever committeth sin transgresseth also the law: for sin is the transgression of the law. KJV

Sin is a transgression, an iniquity, an unrighteous act. It is a 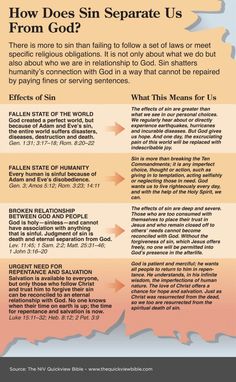 deviation from God’s will. Sin is a form of evildoing since it is in
opposition to God’s decrees and desires. It is an open rebellion and
disobedience to what God has declared is right and all sin is unholy.
Sin can only be properly understood in relationship to God since God is
the holy one. God’s standard of moral perfection is what we are all
obligated to obey and when we do not, we have sinned. [1 Peter 1:16]

23 For all have sinned, and come short of the glory of God; KJV

This is because of Adam’s sin in the Garden of Eden and we inherited
his sinful nature. This is why the Scripture says that sin entered the
world through one man, Adam (Rom. 5:12).

Scripture further says that we are by nature children of wrath (Eph.
2:3). In other words, because we are fallen in our sin natures we
deserve damnation. But God is merciful in that he sent Jesus to cleanse
us of our sins.

Sin is doing what is contrary to the revealed will of God. That is
the long and the short of it. If God says “Do not lie” and we lie, then
we have broken His law and sinned. Sin goes against the holy character
of God. How do we know? Because it goes against Law. One of the purposes of the law is to make us aware of sin and we need to be saved. The second, is to lead us to Chris.

The Law – The Law, then, is the standard of moral
purity. The Old Testament contains the Law of God. Sin is a perfect
standard because it is God’s standard. When we fail to keep the law, we
have sinned. When we sin, we offend God. This offense against God

results in a judgment. When laws are broken, they have penalties.
Therefore, there is no law without a penalty. Therefore, breaking God’s
law brings judgment which is separation from God. Romans 6:23 reads:
“the wages of sin is death . . .” Therefore, to sin, to break God’s
law, results in judgment. If God did not judge the sinner, then He
would not be upholding His holiness; and he would be allowing sinners to
go unpunished. This is a pretty dismal picture—right?

There is more to the story! The balance of Rom 6:23 reads: …”but the gift of God is eternal life through Jesus Christ our Lord. KJV
God, in His love, mercy and grace made a way for man to be redeemed; a
way for us to be reconciled with God. But it took the shedding
of blood. Heb 9:22 reads: And almost all things are by the law purged with blood; and without shedding of blood is no remission. Without the shedding of blood, there is no forgiveness of sins.

For God so loved the world, that he gave his only begotten Son, that
whosoever believeth in him should not perish, but have everlasting life.

Jesus came to take our place and die for our sins. 1 Peter 2:24 reads:
Who his own self bare our sins in his own body on the tree, that we,
being dead to sins, should live unto righteousness: by whose stripes ye
were healed.

This means that Jesus bore our sin in His body on the cross and paid
for them. He took the judgment upon himself. Further, it means that
anyone who trusts and believes in what Jesus did on the cross will have
his sins removed; he will be saved from God’s future judgment.

So, in response to the question “What is sin?” Sin is best answered by
saying that it is breaking God’s law. All of us have sinned.
Therefore, everyone is under God’s judgment – except for those who have
trusted in God’s provision to escape that judgment. We must also repent
of our sins.

What is biblical repentance

To repent means to turn from sin. The Greek word translated as
repent is metanoeoo, which means to change one’s mind. Repentance is a
heartfelt conviction to turn from wrong doing and do what is right.
Scripture says in Rom 6:15-18

15 What then? Shall we sin because we are not under law but
under grace? By no means! 16 Don’t you know that when you offer
yourselves to someone to obey him as slaves, you are slaves to the one
whom you obey — whether you are slaves to sin, which leads to death, or
to obedience, which leads to righteousness? 17 But thanks be to God
that, though you used to be slaves to sin, you wholeheartedly obeyed the
form of teaching to which you were entrusted. 18 You have been set free
from sin and have become slaves to righteousness. NIV

Before we accept Christ, we are slaves to sin, but afterwards, we are to become slaves to righteousness.

This is part of what it means to be a Christian. We are not called to
continue in wrongdoing. We are called to repent, to stop sinning, to do
what is right—live righteous lives and honor God. Though we are not
saved by our repenting alone, our repentance is something that we do
when we forsake sin because we are trusting in Christ who died to
cleanse us from our sins. 1 John 1:9 Reads: If we confess our sins, he is faithful and just to forgive us our sins, and to cleanse us from all unrighteousness.

This is a Scripture we Christians hold onto dearly—confession and
forgiveness. We hold onto this principal for dear life. But there’s
more to the story. There’s more to forgiveness than confession.

Let’s look at what confession is. Confession is an admission of
sins; an agreement with God that we have sinned against Him for which we
seek forgiveness.

When we first accept Christ, we are required to confess our sins as step one.

But we are also required to repent
of our sins as well. Matt 3:1-2 quotes John the Baptist as saying:

1 In those days came John the Baptist, preaching in the wilderness of Judaea,

2 And saying, Repent ye: for the kingdom of heaven is at hand.

To repent is to turn away from sin; to make a radical change, to
change our minds about sin. This is what regeneration is all about.
Biblically, repentance means to turn from sin with a heartfelt desire to
change and not commit it again. This is what we are required to do.

Afterward we are still required to repent. Prov. 28:13 reads: “He that covereth his sins shall not prosper: but whoso confesseth and forsaketh them shall have mercy.”

Notice what the Scripture says: confess and forsake. To forsake is to give up or leave entirely.

But often, as we move on in Christianity, we forget about step 2. We
confess, but not repent. We must constantly live in repentance; to
consciously reject sin. This power is given to us by the Holy Spirit
but we must exercise it—constantly. Sin is not forced upon us, but is
available.

This does not mean that we will never sin again. But remember the previous Scripture passage, Rom 6:15-18, we are no longer “slaves to sin.” This
means that we are not led by sin to purposely live sinful lives. We
are slaves to righteousness to purposely live righteous lives. Sin
should be an accident in a Christian’s life and we should be remorseful
about it. Therefore, when we do sin, we must acknowledge them and confess
them to God and ask for forgiveness through Christ.

But let us not forget step 2! Repent! To turn away from it with hopes to never repeat it again.

So when we confess…we must repent as well to “have mercy.”

Please feel free to leave any question or comment below. You may
also suggest any Biblical topic you would like covered on this site.

4 thoughts on “Repentance and Sin:”