Is God and Jesus the same?  Is Jesus God?  These are questions that engage a lot of discussion.  During these difficult times it is of particular importance to understand as much as we can about Jesus Christ our Lord and Savior.  Most of us in our knowledge of Jesus have only scratched the surface about Him.

A discussion of this sort is futile without consulting the Scriptures.  Therefore that is exactly where we are going. 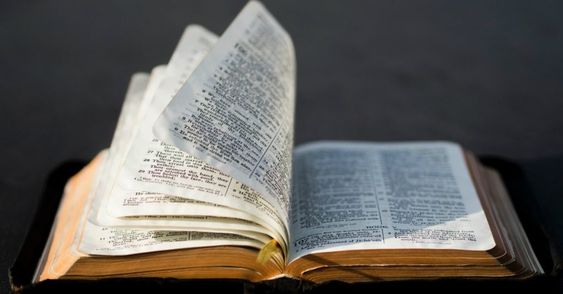 One of the clearest explanations of who Jesus is in found in John 1:1-3

2 The same was in the beginning with God.

3 All things were made by him; and without him was not any thing made that was made.

The Scripture starts with: “In the beginning.”  So, when was the 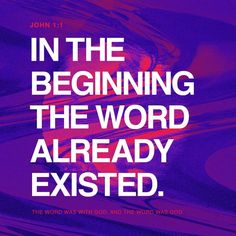 “beginning”?  This is a translation from the Greek word, En archē  [pronounced en ar-chay’] which means before there was a beginning. This is a statement of eternity; it doesn’t mean from the beginning but eternity past.  God is preexistent and has no beginning, He just was and just is
and just will be.

So “in the beginning was the Word.”
The word “Was” in this passage is translated from the Greek word ēn [pronounced heyn] which is often used to express deity.  It means to be or I am. To be means everlasting existence, without commencement or basis.  God used this term as reference to Himself when He was commissioning Moses. [Exodus 3:14]

So we see that from eternity past, God who has always been in continuous existence was “the Word.”  The “word”
represents the course of action by which God makes Himself known, proclaims His will, and brings about His purposes.  It was the commanding Word of God that brought creation into existence (Genesis 1:3), and destroyed the world through the flood (Genesis 6:7), announced impending and future acts of judgment (Exodus 9:20-21, I Kings 2:27), as well as His commitments and promises to His blessings (Genesis 15: 1, 4) and even particular instructions (Joshua 8:27).

To sum this up, the “Word” is God’s expressed will.  Therefore this “Word was with God.” And “the Word was God.” The word “with” is translated from the Greek word pros [Pronounced: pros] and carries the meaning of both being with and acting toward.  Therefore (the Word) was both with God and acting with God in total agreement.

And verse 2 ties this thought up by saying “ The same was in the beginning with God.  The eternal God and the eternal Word existed from eternity past.

Verse3 addresses God’s sovereignty in creation.  “all things were made by him.”  If it isn’t verbalized by God’s Word; if it doesn’t come from the mouth of God it simply won’t exist.

Verses 4-13 go on to address the arrival of Christ and then we come to verse14 which reads:

And the Word was made flesh, and dwelt among us, (and we beheld his glory, the glory as of the only begotten of the Father,) full of grace and truth. 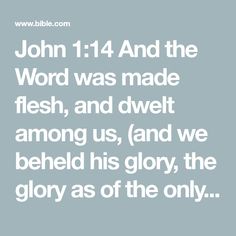 So here we have it.  “The Word was made flesh.”  This is the manifestation of Christ.  “The Word;“ the same “Word” in verse 1 was made flesh and blood.  This is God’s Son, the Lord Jesus Christ.   He became a man.  No greater message could ever be announced to man.

So we see that Christ is preexistent. This means He was there before creation. He has always existed with God.  He was and is face to face with God forever.  God’s speaking of His Word reached a pinnacle in the sending forth of His Son.

Here we witness in Scripture how God and Jesus is the same.  But Scripture confirms itself so we’ll look at more confirmation of this fact.  Col 1:12-15

12 Giving thanks unto the Father, which hath made us meet to be partakers of the inheritance of the saints in light:

13 Who hath delivered us from the power of darkness, and hath translated us into the kingdom of his dear Son:

14 In whom we have redemption through his blood, even the forgiveness of sins:

In this passage, Paul is encouraging the Colossians to be thankful to God for the gospel of His Son Jesus that has delivered redemption trough the shedding of His blood which allows for the forgiveness of our sins.

15 Who is the image of the invisible God, the firstborn of every creature:

16 For by him were all things created, that are in heaven, and that are in earth, visible and invisible, whether they be thrones, or dominions, or principalities, or powers: all things were created by him, and for him:

17 And he is before all things, and by him all things consist.

18 And he is the head of the body, the church: who is the beginning, the firstborn from the dead; that in all things he might have the preeminence.

He is the “firstborn of every creature.”  There are teachings that use this phase to base the doctrine that Jesus was a created being.  However that is baseless since John 1:1 states: “…and the Word was God.” And John 1:14 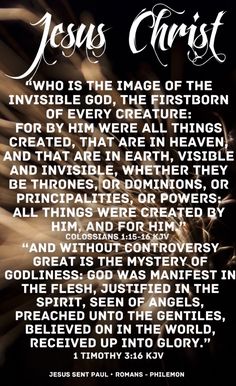 states:  “and the Word was made flesh and dwelt among us.”

Verse 16 confirms Jesus’ sovereignty in creation: “all things created” “were created by him, and for him.”  This is the same proclamation stated in John 1:3 in reference to God.  Therefore, Jesus in conjunction with God is the creator of “all things.”  This illuminates Genesis 1:26 where it reads: “And God said, Let us make man in OUR image, after OUR likeness…:

So, who was He speaking to? God was speaking to Christ His Son, and to the Holy Spirit.  This is the Godhead; the Trinity.  For more on the trinity click the article: All About the Trinity.

There are more revelations in this passage (perhaps in a future article) but the point for now: Jesus is the perfect revelation of God because He is the Word and He is God.

5 Let this mind be in you, which was also in Christ Jesus:

6 Who, being in the form of God, thought it not robbery to be equal with God:

7 But made himself of no reputation, and took upon him the form of a servant, and was made in the likeness of men:

8 And being found in fashion as a man, he humbled himself, and became obedient unto death, even the death of the cross.

Just think of the enormous step down that Jesus had to take to become a Man. It is utterly impossible for us to comprehend the humility it took.  However, this is exactly what He did.

Let’s look at some acknowledgements Christ Himself made of His deity.

I and my Father are one.

Here Jesus was staking His claim before the Jews.  The claim of Jesus was that He is “One” with God, specifically, He is God Himself. But Jesus was not claiming to be the same person as God. The word “one.” means thing, not 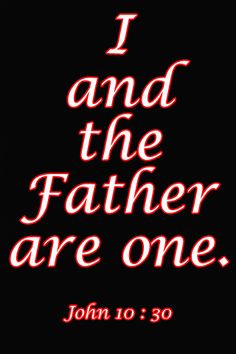 There is no doubt  that this is exactly what Jesus was claiming.  His claim was perfectly understood by those standing around Him as indicated in the verses that follow (vss. 32-33). They wanted to stone Him for blasphemy.

8 Beware lest any man spoil you through philosophy and vain deceit, after the tradition of men, after the rudiments of the world, and not after Christ.

9 For in him dwelleth all the fulness of the Godhead bodily.

10 And ye are complete in him, which is the head of all principality and power:

This was Paul’s warning to the Colossians to not be influenced the false teachings of men instead of Christ’s.  Because in Christ was God and we are complete in our union with Him because He is the head of every ruler authority.

8 Philip saith unto him, Lord, shew us the Father, and it sufficeth us.

9 Jesus saith unto him, Have I been so long time with you, and yet hast thou not known me, Philip? he that hath seen me hath seen the Father; and how sayest thou then, Shew us the Father?

10 Believest thou not that I am in the Father, and the Father in me? the words that I speak unto you I speak not of myself: but the Father that dwelleth in me, he doeth the works.

11 Believe me that I am in the Father, and the Father in me: or else believe me for the very works’ sake.

Anyone having problems understanding the union of God and Christ should not despair.  The disciples didn’t either until they were indwelt with the Holy Spirit.  But here we have the unmistakable testimony from the Man Himself: “I am in the Father, and the Father in me.”

God was inside Jesus, and Jesus was inside God. This can be called the joint Indwelling Presence of God and Christ, each dwelling in the other. This simply means that each has the nature and being, the Spirit and Mind of the other. Each has the Presence, the very Being and Spirit of the other dwelling within Him perfectly.

Note the point Jesus was making. The proof that He was the manifestation of God, that He was the One who came to earth to reveal God, is clear: God’s presence is not only with
Him; God’s presence is in Him. He Himself is God. He Himself; His Person, His Being, His nature, His character, His love, His care, His just dealings, all that He was—revealed exactly what God is. Note also that Jesus asked Philip a question: “Believest thou not that I am in the Father, and the Father in me?”

The conclusion: Jesus Christ is the express image, the exact representation, the perfect manifestation, the very Person of God Himself. There is no other person who can bring us near God nor any other life-style to follow in

reaching God. Jesus Christ is the Sovereign Majesty of the universe who came to earth as God to save men.  And as Jesus said, “I am the way, the truth, and the life: no man cometh unto the Father, but by me.” John 14:6 [cf. 1 John 5:20]

All questions, comments and concerns are welcomed below.  I am waiting to answer and address them.

8 thoughts on “God and Jesus: The Same?”