The book of Revelation, the final book in the Bible, is a book of mystery written by the Apostle John during his exile on the island of Patmos. The reason for its mystery is that it is an apocalyptic letter that relies heavily on symbols, visions, and Old Testament references in order to reveal the ultimate fulfillment of God’s promise given to Abraham back in the book of Genesis. One of the most intriguing revelations is the 666 mark of the beast.

The Mark of the Beast a Study

The first thing to realize is to emphasize again is that Revelation is heavily symbolic. Therefore, the 666 mark of the beast is symbolic. But, of what?

6 Then I saw another angel flying in the midst of heaven, having the everlasting gospel to preach to those who dwell on the earth — to every nation, tribe, tongue, and people — 7 saying with a loud voice, “Fear God and give glory to Him, for the hour of His judgment has come; and worship Him who made heaven and earth, the sea and springs of water.” NKJV

To look at the symbolism here, we have angels flying. Wings represent speed, and here we have angels moving with rapid speed with an urgent message that Jesus is soon to arrive. We, the readers, are encouraged to worship the Creator because there is another power competing for our worship.

9 Then a third angel followed them, saying with a loud voice, “If anyone worships the beast and his image, and receives his mark on his forehead or on his hand, 10 he himself shall also drink of the wine of the wrath of God, which is poured out full strength into the cup of His indignation. He shall be tormented with fire and brimstone in the presence of the holy angels and in the presence of the Lamb. 11 And the smoke of their torment ascends forever and ever; and they have no rest day or night, who worship the beast and his image, and whoever receives the mark of his name.” NKJV

A central theme in Revelation is the colliding of true and false worship.

Back in chapter 13, the believers are told how difficult it would be for them if they refused the beast’s mark. However, in these verses, an angel explained to the nonbelievers what would happen to them if they did receive the beast’s mark. Their ultimate judgment would be much worse and the penalty eternal. While those who belong to God would suffer and be killed, they would have a glorious eternity awaiting them (14:1-5). However, those who worship the beast and accept his mark would choose to operate according to the Antichrist’s world economic system and ultimately face God’s judgment. To attain what the world merits, these individuals would have turned away from God and violated Christian principles.

12 Here is the patience of the saints; here are those who keep the commandments of God and the faith of Jesus. NKJV

Here are the saints that endure. In the last days, all through the great 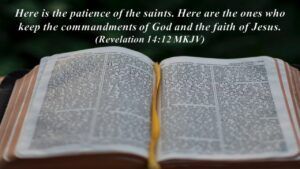 tribulation, Christians will face dreadful times. They will have to reject Christ and accept the mark of the beast or else face death. But, if they persevere for Christ, if they are sincere in believing that heaven is real and that Christ loves them, only then will they escape the judgment of God. However, only those who persist and truly set their lives apart unto God, only those, will avoid the coming judgment.

Therefore, we have a presentation of two kinds of worship: those who worship the beast and those who “keep the Commandments of God and the faith of Jesus Christ.”

The final conflict is revolved around the matter of worship: whom we worship, when we worship, or even whether or not we worship. Therefore, there is no escape because every person on earth is involved in some form of worship.

Either we worship God or something else because we were all created to worship. [Eccl. 3:11]

11 “You are worthy, O Lord, To receive glory and honor and power; For You created all things, And by Your will they exist and were created.” NKJV

What qualifies God for worship is the fact that He created all things, and it is by His will they exist.

God has left us a sign of His creative authority.

Moreover I also gave them My Sabbaths, to be a sign between them and Me, that they might know that I am the Lord who sanctifies them.

16 Bind up the testimony, Seal the law among my disciples.

2 Then I saw another angel ascending from the east, having the seal of the living God. And he cried with a loud voice to the four angels to whom it was granted to harm the earth and the sea, (3) saying, “Do not harm the earth, the sea, or the trees till we have sealed the servants of our God on their foreheads.”

For this is the covenant that I will make with the house of Israel after those days, says the Lord: I will put My laws in their mind and write them on their hearts; and I will be their God, and they shall be My people.

God’s seal says to “remember the Sabbath day to keep it holy” therefore, God’s seal and law which is in the mind, is an intelligent, unforced decision to serve God.

However, Satan has attacked God’s Sabbath because it is the seal of God’s Law.

Since the final issue revolves around worship, what power claims it has the authority to change God’s Law?

Previously, we identified that the antichrist beast is a kingdom and the little horn (Dan. 7:8) was a little kingdom somewhere in Europe called the Vatican or the Papacy.

“perhaps the boldest thing, the most revolutionary change the church ever did happened in the first century. The holy day, the Sabbath, was changed from Saturday to Sunday…not from any directions noted in the Scriptures, but from the Church’s sense of its own power…”

This statement is an admission that the church (the universal—Catholic church) changed the day of worship from Saturday to Sunday.

From the St. Catherine Catholic Church Sentinel 5/21/1995 – “People who think that the Scriptures should be the sole authority, should logically become 7th day Adventists and keep Saturday holy.”

This statement acknowledges that the Catholic Church worked against the authority of the Scriptures when it changed the Sabbath from Saturday to Sunday.

From the Decretal De Translat. Espicop.cap. “The Pope has changed times, to abrogate laws, and to dispense with all things, even the precepts of Christ.”

This is fulfilled prophecy and confirmation that Satan, through the Pope, has attacked God’s seal of the Sabbath, the basis of all worship.

In Revelation 13, we have the beast. In the symbolic nature of Revelation, the beast represents a kingdom. Rev 13:1-2

1 Then I stood on the sand of the sea. And I saw a beast rising up out of the sea, having seven heads and ten horns, and on his horns ten crowns, and on his heads a blasphemous name. 2 Now the beast which I saw was like a leopard, his feet were like the feet of a bear, and his mouth like the mouth of a lion. The dragon gave him his power, his throne, and great authority.

Rev 13:7 And it was given unto him to make war with the saints, and to overcome them: and power was given him over all kindreds, and tongues, and nations.

Myer’s General History, p.455 “Almost all the kings and princes of Europe swore fealty [allegiance] to him as their overlord. Rome was once more the mistress of the world.”

It is a blasphemous power

·  Rev 13:6 And he opened his mouth in blasphemy against God, to
blaspheme his name, and his tabernacle, and them that dwell in heaven.

·  Blasphemy is a man making himself God. Additionally, assuming any rights or power that belongs to God alone.

It is a religious power.

·  Rev 13:3 And I saw one of his heads as if it had been mortally
wounded, and his deadly wound was healed And all the world marveled and
followed the beast.

· From The Encyclopedia Americana, 1941 edition “in 1798 he (Berthier—France)…made his entrance into Rome, abolished the papal government and established a secular one.” He took the Pope captive and sent him into exile in France, where he died.

The Pope was escorted into power by the government (Constantine). However, the same power that escorted him into power took him out of power.

He who rules with the sword (the civil power) will be killed by the sword. The wounded head represents this.

The deadly wound was healed. The Papacy was once again given back some land and some degree of authority, and restoring her to respect and power began.

Rev 13:18 Here is wisdom. Let him who has understanding
calculate the number of the beast, for it is the number of a man: His
number is 666.

·  666 is not the mark of the beast. 666 is the number of the beasts. It represents a false religious system

·  In Babylon, there originated the six adjustable of 60 degrees or
60 minutes in an hour or 360 degrees or 360 days in the year. They had
the idea that they were 36 different heavenly bodies that they would
worship. Each heavenly body would be assigned a number from 1 to 36. The 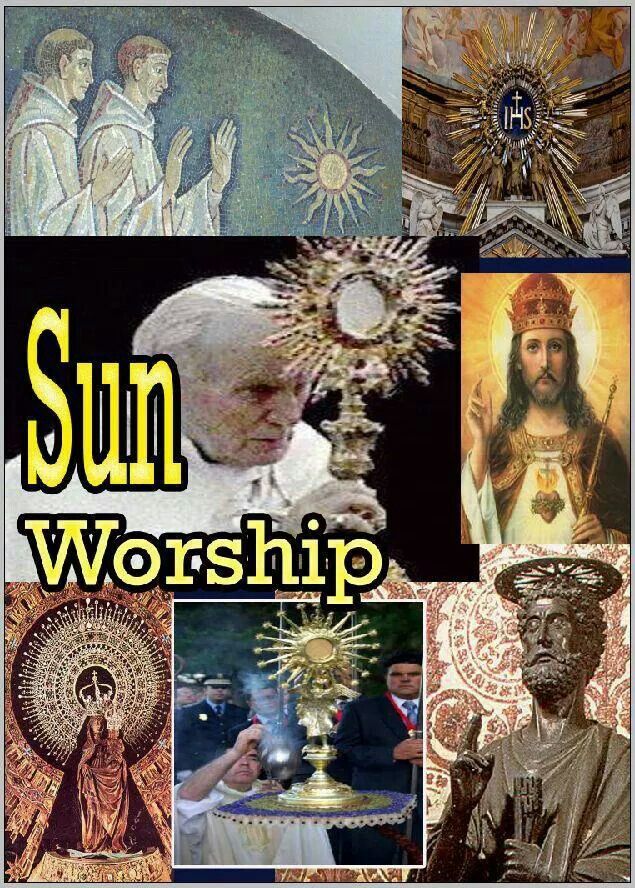 supreme God that they worshipped was the Sun. The supreme God to be
worshipped would have been the Sun. They would add +1+2+3 until the
number 36 was reached. That number would be 666. That number would be
assigned to the Supreme god, which was the Sun. The first of the week
was dedicated as his day to be worshipped (it was called sun’s day). The Sun god in Babylon was called Belmar Duke. He has a chief priest who
goes by the name Pontifex Maximus (which means chief priest). This idea
was passed down to pagan Rome-Julius Caesar, who wore the title Pontifex

Maximus. This where the word pontiff originates. Therefore, the chief
priest would wear the number 666 as emulates around his neck made of
gold because the color of the Sun is gold which is why Babylon is
represented in the Scriptures by gold because this is a kingdom that
worships the sun.

·  They wore the golden emulates around the neck, which had the
sexagesimal, and they have six lines and six rows from one to 36 and
whatever direction you count each line, and each row would give you one
hundred eleven (111). If you multiply that by six, you will have six six
six in whichever direction you multiply.

·  This same practice was passed on from Babylon to Rome when the
Babylonian priests arrived in Rome. Rome adopted the practices of
Babylon, and when the powers were shifted from the Caesars to the bishop
of Rome, the title “pontiff” was adopted by him.

·  His crown, which Belgium gave him in 1871, was the expression by carros filiadio-which means my corrupt god.

What Precisely is the Mark of the Beast?

Letter, Oct. 28, 1895, from C.F. Thomas “Of course the Cah=tholic Church claims that the change was her act…and the act is a mark of her ecclesiastical power and authority in religious matters.”

Each day of the week was dedicated to a different heavenly body.

Bottom line: The Catholic church, on its own authority, adopted Sunday as the day of worship.

From the Catholic Record, Sept 1, 1923, “Sunday is our mark of authority…The church is above the Bible, and this transference of Sabbath observance is proof of that fact.”

The seal of God is the Sabbath

At the end of time, there are only two choices:

·  The mark of the beast

Questions, comments, and concerns can be left below. You will receive a response