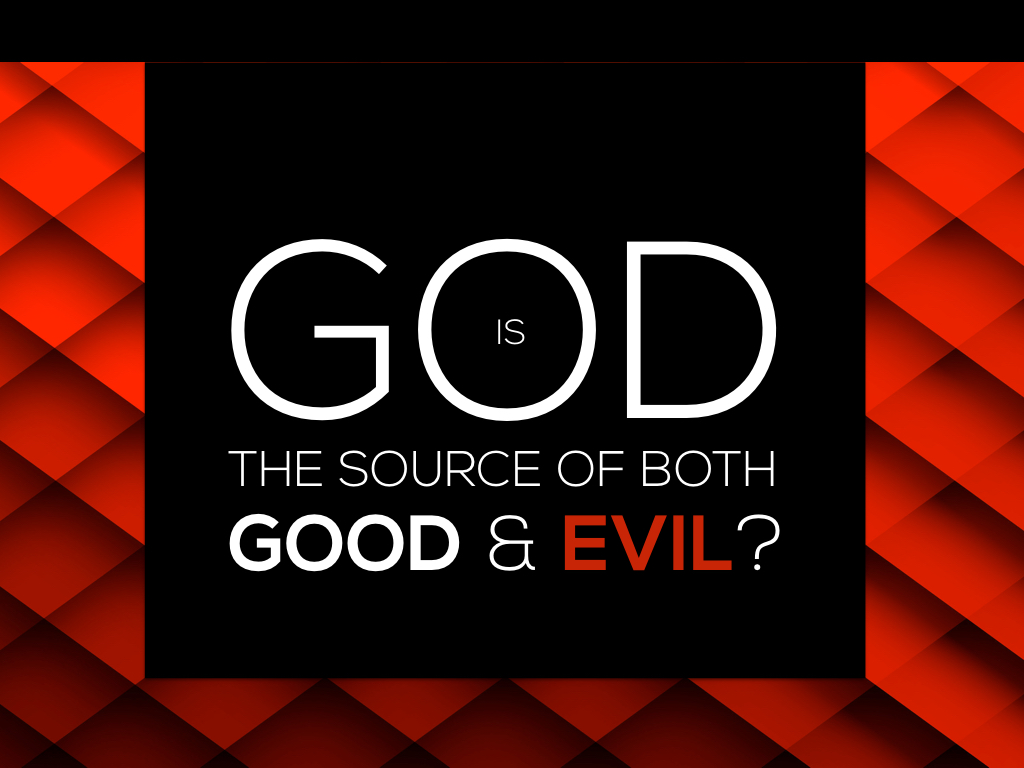 Evil – What a word! We basically know what it is, but how much do we know about it? What is its origin, and why is it here? Let’s take a look as we explore God and evil.

According to the Merriam-Webster Dictionary,” morally reprehensible: sinful, wicked – an evil impulse:” arising from actual or imputed bad character or conduct a person of evil reputation.

According to Nelson’s Bible Dictionary, “A force that opposes God and His work of righteousness in the world (Rom 7:8-19). The word is also used for any disturbance to the harmonious order of the universe, such as disease (Ps 41:8). But the Bible makes it plain that even these so-called “physical evils” are the result of a far more serious moral and spiritual evil that began with the FALL of Adam and Eve in the Garden of Eden (Gen 3).”

Nelson’s definition states that the ultimate source of evil “in the world” is Satan. However, evil existed long before the fall. Satan bought evil with him and tempted eve to eat from the tree of the knowledge of Good and evil; thus, evil entered the world. So, where did evil come from, and what is its origin?

The one true God is a God of righteousness and love, loving-kindness, grace, and mercy. He is the Creator of all things. But – did He create evil? 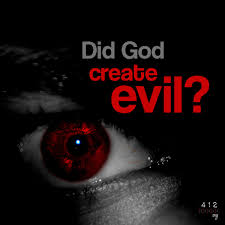 5 I am the LORD, and there is none else, there is no God beside me: I girded thee, though thou hast not known me:

7 I form the light, and create darkness: I make peace, and create evil: I the LORD do all these things.

This passage shines a light on the sovereignty of God. He is the Creator of all things, including evil. From the rising to the setting of the sun, from one end of the earth to the other, all people were to know that there is no God but the Lord Himself (Jehovah, Yahweh). He alone is the Creator, for He alone has created both light and darkness. Moreover, He alone is sovereign, controlling both good and evil, peace and calamity.

Why did God Create Evil?

God desires His creatures to love Him, to have a real love for Him. He could have created creatures that loved Him automatically. However, they would have merely been robots incapable of real love simply because love is not real without the ability not to love. This reality is why God gave man free will to choose to do right (love Him) or to do wrong-evil (disobey Him). His desire is for us to do right but out of love and choice, not out of obligation.

Evil is a by-product of good and existed before Adam and Eve were created. Therefore, when God placed the tree of the knowledge of good and evil in the garden and made a law not to take of its fruit, Adam and Eve had a choice to love God and obey or disobey Him and commit evil, which is sin. Before making their choice, they knew nothing about evil; they were innocent. Had they not eaten its fruit, there would have been no evil in the world.

Evil serves the purpose of establishing real, genuine love relationships between creation and the Creator.

Does God do Evil? 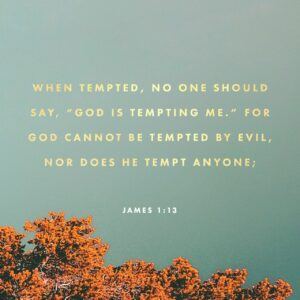 This question raises some controversy. The most common response is, no, God is not evil; therefore, He cannot commit evil. There is some truth in that response. However, it contradicts Scripture that says He does. For example, the Scripture above quotes God as saying, “I create evil.”

5 Then the word of the LORD came to me, saying,

7 At what instant I shall speak concerning a nation, and concerning a kingdom, to pluck up, and to pull down, and to destroy it;

8 If that nation, against whom I have pronounced, turn from their evil, I will repent of the evil
that I thought to do unto them.

Here is a message to Israel through the prophet Isaiah. He used the illustration of a potter to depict His relationship between His people and Himself.

The message is that He has the sovereign right and power to save or condemn as He chooses. As the potter holds the clay in his hands, the Lord holds His people in the palm of His hand. The metaphor is a descriptive way of saying the Lord can do with His people as He wills.

There is also a clear illustration of God’s mercy and grace: if a nation repents or turns away from their evil, He will repent from the “evil”
He “thought to do unto them.”
There are other Scriptures with God conveying similar thoughts, but the message is clear enough. However, further explanation is required which follows.

There are two kinds of evil, destructive or calamity and moral evil. The Old Testament uses two Hebrew words translated as evil: ra’ah and rash’a’. The Hebrew word used in Isaiah 45:7 is ra’ah, which means calamity, destruction, distress, and hardship.

This evil is the kind of evil the Lord unleashes in His judgment against the unrighteous, those who disobey and break His moral law (sin). The calamities of the world are the result of the original evil sin committed by Adam and Eve. God allows this but it is not moral evil. For more information on this, please read the article, Why Does God Allow evil to exist, on this website.

God does not commit moral evil or sin. Look at what the Scripture reads in Zeph. 1:12,

12 And it shall come to pass at that time, that I will search Jerusalem with candles, and punish the men that are settled on their lees: that say in their heart, The LORD will not do good, neither will he do evil.

The Hebrew word used in this Scripture is rash’a, which is moral evil.

In summary, the Lord does commit evil, but not for evil or immoral purposes (sin). He uses evil only for righteous purposes to bring calamity to the unrighteous, so they may recognize and honor Him. He does not commit moral evil as that kind of evil comes from Satan. As the Scripture reads in James 1:13, “And remember, when you are being tempted, do not say, “God is tempting me.” God is never tempted to do wrong, and he never tempts anyone else.” NLT

God never has nor will He ever tempt anyone to sin; only Satan.

Please feel free to leave any questions, comments, or concerns below.