Anyone who has been a Christian for any length of time has heard of the Antichrist. But how many Christians really know what the Antichrist is? I hope that by the time you have reached the end of this article, you will know the answer to the question: what is the Antichrist?

Table of Contents hide
1 What is the Antichrist?
2 Conclusion

What is the Antichrist?

In eschatology (the study of the end-times), the anti-Christ, or Antichrist, refers to people or forces prophesied by the Scriptures to oppose Christ and substitute themselves in Christ’s place before His Second Coming. The word “Antichrist” is found five times in the New Testament, solely in John’s First and Second Epistles.

Therefore, the Antichrist refers to people or forces. But which one is it? Can it be both?

“Therefore take heed to yourselves and to all the flock, among which the Holy Spirit has made you overseers, to shepherd the church of God which He purchased with His own blood. 29 For I know this, that after my departure savage wolves will come in among you, not sparing the flock. 30 Also from among yourselves men will rise up, speaking perverse things, to draw away the disciples after themselves.” NKJV

The warning from Paul to the Christian leaders was that the spirit of the anti-Christ was among them both within and without the church.

We must understand that two forces are competing for the loyalty of humanity today.

This competition becomes apparent in a vision that the prophet Daniel experienced.

2 “Daniel said: “In my vision at night I looked, and there before me were the four winds of heaven churning up the great sea. 3 Four great beasts, each different from the others, came up out of the sea.” NIV

This vision is the same as the one in chapter 2. Daniel had a prophetic vision, and it is for us to understand what he saw in this vision.

Some Biblical prophecy is symbolic, and the prophetic symbols in this vision are as follows:

Here we have the first indication that the Antichrist is not a person but a kingdom.

4 “The first was like a lion, and it had the wings of an eagle. I watched until its wings were torn off and it was lifted from the ground so that it stood on two feet like a man, and the heart of a man was given to it. “NIV 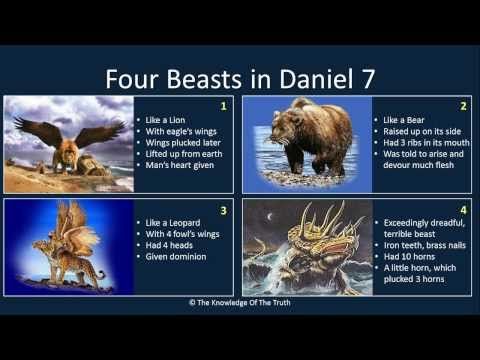 other bird. Wings in Bible prophesy represent speed, which means that this kingdom moved faster and higher than any other kingdom.

5 “And there before me was a second beast, which looked like a bear. It was raised up on one of its sides, and it had three ribs in its mouth between its teeth. It was told, ‘Get up and eat your fill of flesh!” NIV

The bear represented the second kingdom—Medo-Persia 539-331 BC.

6 “After that, I looked, and there before me was another beast, one that looked like a leopard. And on its back it had four wings like those of a bird. This beast had four heads, and it was given authority to rule.” NIV

The Leopard represented the third kingdom—Greece 331-168 BC led by Alexander the Great.

It had four wings as opposed to Babylon, meaning Greece conquered at two times more the speed of Babylon.

Alexander covered the distance of 2000 miles in 2 yrs on horseback and conquered every known kingdom that existed at that time.

7 “After that, in my vision at night I looked, and there before me was a fourth beast — terrifying and frightening and very powerful. It had large iron teeth; it crushed and devoured its victims and trampled underfoot whatever was left. It was different from all the former beasts, and it had ten horns.” NIV

Dan 7:24 “the ten horns are ten kings who shall arise from this kingdom. And another shall rise after them; He shall be different from the first ones And shall subdue three kings.”

8 “While I was thinking about the horns, there before me was another horn, 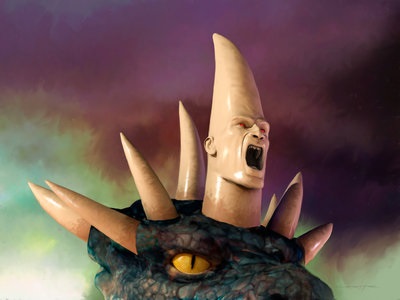 a little one, which came up among them; and three of the first horns were uprooted before it. This horn had eyes like the eyes of a man and a mouth that spoke boastfully.” NIV

It was different in that it was not only a political power but a religious power as well—“speaking blasphemous words.” In addition, it displaced three (3) nations.

From the— The Monumental History of Christianity pp. 42, 43

“Out of the ruins of the Roman Empire, there gradually arose a new order of states whose central point was the Papal See. Therefore, inevitably resulted in a position not only new but very different from the former.”

The prefix Anti—does not always mean against but also can mean in place
of or instead of something. The antichrist is not a kingdom that is against Christ but replaces Christ.

This little horn symbolizes a powerful religious system that would align itself with the last seven (7) of the ten (10) political horns that were to arise after the fall of Rome. This synchronization amid church and state produced what eventually became known as the Holy Roman Empire.

Daniel continues his interpretation of the little horn in verse 21:

21 “I was watching; and the same horn was making war against the saints, and prevailing against them, 22 until the Ancient of Days came, and a judgment was made in favor of the saints of the Most High, and the time came for the saints to possess the kingdom.” (23) “Thus he said: ‘The fourth beast shall be A fourth kingdom on earth, Which shall be different from all other kingdoms, And shall devour the whole earth, Trample it and break it in pieces. (24) The ten horns are ten kings Who shall arise from this kingdom. And another shall rise after them; He shall be different from the first ones, And shall subdue three kings.” NKJV

This power was a persecuting power.

This little horn makes war against the saints, speaks pompous words against God, intends to change times and law, and persecuted the saints for a “time and times and half a time” (literally three and a half years, but using the day-for-a-year principle of Numbers 14:34 and Ezekiel 4:6, 1,260 years).

This Scripture speaks of a kingdom that will rule 1260 years. Therefore, the antichrist cannot be a person because a person cannot rule for 1260 years.

These 1260 years symbolize the papal oppression. This time began in the early 6th century. The last Roman emperor, Romulus Augustulus, was forced from his throne in 476 AD.

The barbarians who did not accept the Catholic religion controlled the city until 538. The Byzantine Empire under General Belisarius had victories in the Gothic wars that allowed Rome to become an influential center for the Roman Catholic authority that ruled during the Middle Ages.

Confirmation of this persecution can be observed through the centuries, as hundreds and thousands of individuals in Europe lost their lives through the inquisitions of the Roman Catholic judicial system. They were tormented for confessions of being nonconformists and killed because they would not yield to the authority and doctrines of the Roman Catholic Church and the Pope.

22 “until the Ancient One—the Most High—came and judged in favor of his holy people. Then the time arrived for the holy people to take over the 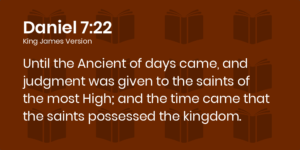 The Roman Catholic political power reached its crest in the 12th century and then gradually eroded, weakened by internal corruption in the Church and the Protestant Reformation that took large property segments out of the Roman realm of influence.

The death toll of Catholic military authority in Europe arrived with the French and Italian revolutions. A symbolic but essential date was 1798, when the armies of France took Pope Pius VI as a prisoner. The striking removal of the head of the Church from Rome came precisely 1260 years after 538 AD, the year in which the barbarians were driven from Rome.

Although the inquisitions of that time were abolished, the Bible indicates religious persecutions from the “little horn” will return, resulting in the death of many before Christ returns.

It will “intend”
to change times and laws. Another aspect of the prophesied actions of the little horn is that in addition to speaking pompous words against God and persecuting His people, this false religious system would “intend to change times and law.”
History indicates that the Roman Catholic Church has done this.

Believing that it had the power to change God’s laws, this church has switched the day of worship from Saturday to Sunday and substituted its particular days of worship for the holy days of the Bible. For further explanation, see Saturday vs. Sunday Worship on this website.

It will “intend” to change times and laws.

Below are some confirmations of this intent; some are even from Catholic sources.

From the—Ancient Church, pp. vi, vii – “In the interval between the days of the apostles and the conversion of Constantine…Rites and ceremonies of which neither Paul nor Peter ever heard, crept silently into use and then claimed the ranks of divine institutions.”

From the—The Faith of our Fathers, p. 89 – “You may read the Bible from Genesis to Revelation, and you will not find a single line authorizing the sanctification of Sunday. The Scriptures enforce the religious observance of Saturday.”

Q:” Which is the Sabbath Day?” 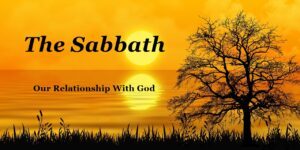 A: “Saturday is the Sabbath Day”

Q: “Why do we observe Saturday instead of Sunday?”

A:  “The Catholic (universal) church transferred the solemnity from Saturday to Sunday.”

Catholic Encyclopedia vol. 4, p. 153 – “The church,…after changing the day of rest from the Jewish Sabbath, or seventh day of the week, to the first, made the third commandment refer to Sunday as the day to be kept holy as the Lord’s day.”

From—Karl Keating, Catholicism and fundamentalism, 1988 p, 38- “fundamentalist meet for worship on Sunday, yet there is no evidence in the Bible that corporate worship was to be made on Sundays. The Jewish Sabbath, or day of rest, was, of course, Saturday. It was the Catholic church that decided Sunday should be the day of worship for Christians, in honor of the resurrection.”

Q. When Protestants do profane work upon Saturday, or the seventh day of the week, do they follow Scripture as their only rule of faith?

A. “On the contrary, they have only the authority of tradition for this practice. In profaning Saturday, they violate one of God’s Commandments, which, on their principles, has never been abrogated”:  ‘Remember the Sabbath day to keep it holy.’ (Exodus 20:8)”

From—St, Catherine Catholic Church, Sentinel, May 21, 1995 – “People who think that the Scriptures should be the sole authority, should logically become 7th day Adventists and keep Saturday holy.”

This kingdom is: THE VATICAN!

Daniel, in his vision, additionally saw the conclusion regarding the “little horn,” that when Jesus Christ returns, “the court [judgment] shall be seated, and they shall take away his dominion, to consume and destroy it forever” (verse 26; Revelation 18:2).

“But the court shall be seated, And they shall take away his dominion, To consume and destroy it forever. “ NKJV

18 “After these things I saw another angel coming down from heaven, having great authority, and the earth was illuminated with his glory. 2 And he cried mightily with a loud voice, saying, “Babylon the great is fallen, is fallen, and has become a dwelling place of demons, a prison for every foul spirit, and a cage for every unclean and hated bird! “ NKJV

The origin of the little horn is Babylon, which is doomed to fall, and the kingdom of Christ will prevail.

Any questions, comments, and concerns may be left below. You will receive a response.

4 thoughts on “What is the Antichrist?”